Listen to this article:

The majestic moose is not just Maine’s most famous animal, it is the king of the forests! They are fearless, powerful and resolute, making their presence known when they decide. Seeing one in the wild and up close with its towering antlers is a once-in-a-lifetime event and you may enjoy that if you know the best places to see moose in Maine.

In this piece, we have carefully identified the best spots to observe this iconic creature. We will show you when, how and where to look, whether you decide to make your way into the forests on your own, take a drive on specific scenic routes or join a guided tour.

Moose mate in September so that the calves may be born in June to take advantage of spring vegetation.

Moose have a long gestation period of about 230 days.

Moose have poor sight but excellent hearing and smell.

How do you recognize a moose when you see one? 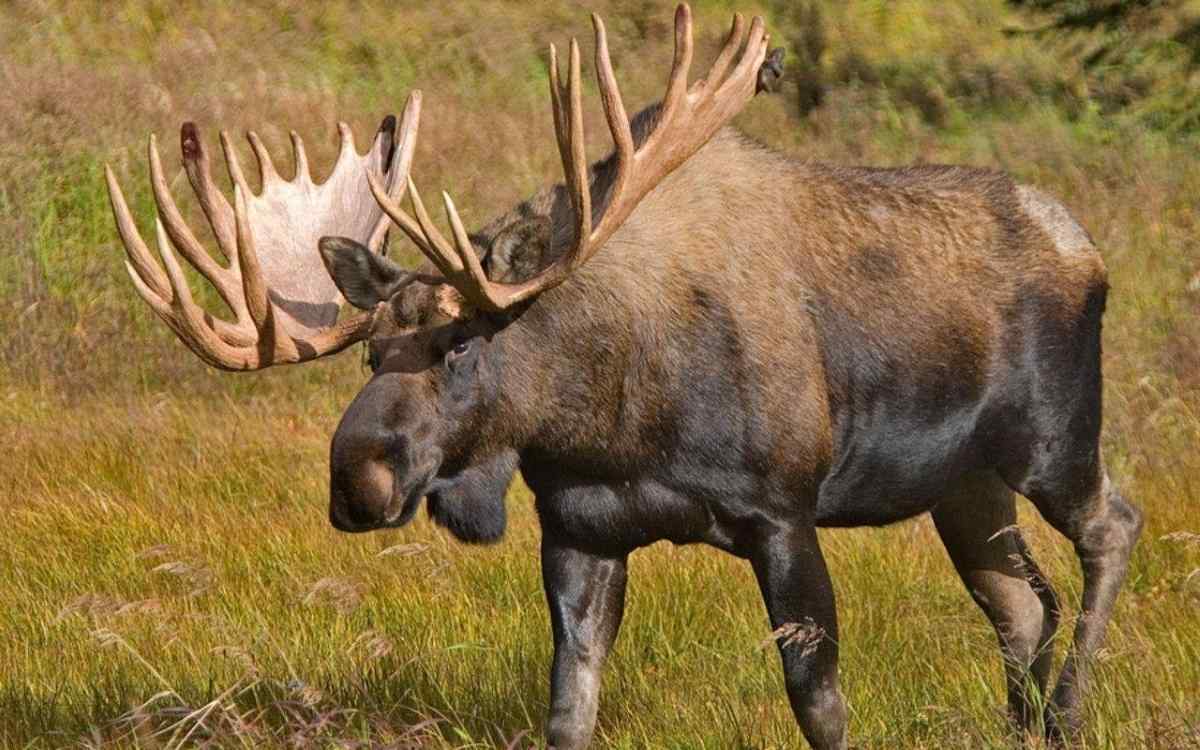 Moose are the largest and heaviest land-dwelling mammal in the deer family. They also have a distinctive appearance that makes them easily distinguishable from other animals. Let us see some of the ways you can tell them apart.

Moose also have long legs, long faces, drooping muzzles, a flap of skin dangling over their chin known as a dewlap or a bell and a hump of fat on the back of their necks.

The antlers of a moose are undoubtedly its most eye-catching feature. Moose antlers are found only on males. The antlers of a mature male moose that begin to grow in early spring can grow up to six feet wide. It takes about 3 to 5 months for the antlers to reach full width.

Moose males use their antlers to fight over females (and impress them) during mating season in the fall. By this time the majestic, palmate antlers have reached their full size.

The conclusion of the mating season, which occurs in November or December, results in bulls shedding their antlers and going off on their own until the beginning of the following mating season.

What are the best times to see moose in Maine? 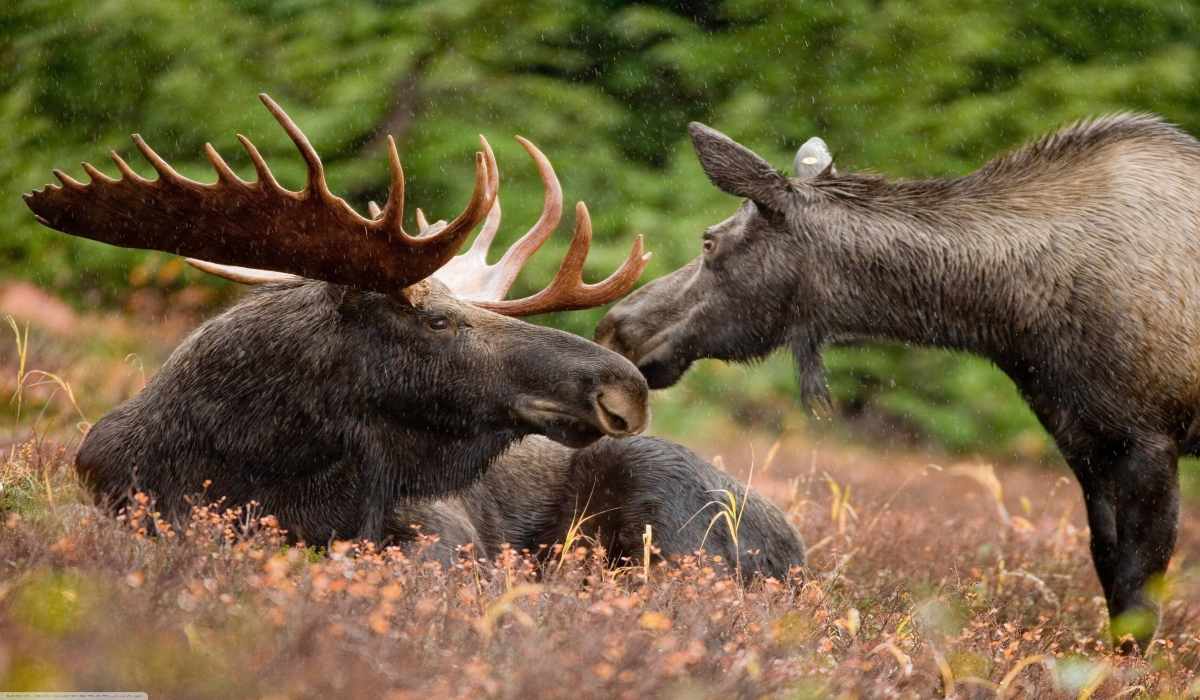 The best times of year to see moose in Maine are from mid-May through July. They are most likely to be seen in May and June, during the pre-birthing and birthing seasons. During the rut (mating season), you can expect to see a lot of bull moose activity, so keep your eyes peeled for big animals with massive antlers in September.

June is the best time of year to see cute baby moose, called calves. At this time, there are lots of plants growing and flowers everywhere. This is also the time of year that the sun sets slowly over the horizon, giving a longer period of light at dusk and enabling the colours of their coats to stand out against the green background. Thus, creating a perfect scene for beautiful photographs (never take selfies with a moose!).

The moose hunting season in Maine runs from late September to the end of November. This is not the best time for a moose safari because they become reclusive at this time and it becomes difficult to see them.

The best time for a moose safari is from mid-June to mid-September when the males have their antlers. However, there can be an exception to this rule if you have a skilled Guide.

Some habits of moose in Maine

Before heading out in search of your moose, it is good to know some of their habits so that you can know where to look.

Generally, it is common to see moose on the side of the road in the early spring, licking up salt leftover from the winter. It is also common to spot them in the lakes and ponds as the weather begins to warm up in early summer in search of greenery.

Moreover, due to the increase in black flies during this time of the year, you can also look out for mud hollows where moose may be found wrapped up with mud to keep black flies and mosquitoes at bay.

How to spot a moose in Maine

A moose can be difficult to spot in its natural habitat, but there are several things you can do to boost your chances of seeing them more often.

You’ll have a better chance of spotting a moose if you go hiking.

However, be mindful of your surroundings and be quiet because a moose has an excellent sense of smell and hearing and can hear you from a distance when on foot.

If you spot a moose, be sure to keep your distance.

The following are some signs that may tell you if a moose is close by.

Rubbed trees by moose with their antlers.

Driving at dawn or dusk along specific routes and looking in swampy or shaded areas will give you a chance to spot a moose. However, moose are everywhere in this state and can pop up at any time (day or night) in front of you.

You will have a better chance of observing moose for long periods and at a closer distance when you are seated quietly in a car. This is because moose have poor eyesight and are not afraid of cars.

However, never honk at them. Moose may take that as a challenge and charge at you.

Here are some things to do while hoping to see a moose by car.

Seeing moose in Maine simply requires being in the right spot at the right time, as they freely move about their natural environment. This is when experienced guides familiar with the area come into play.

Several registered Maine guides can take you on a moose tour on land or canoe. This method represents your best chance of seeing moose for sure.

Where can you see moose in Maine?

Maine has the second-highest population of moose in the US. Estimated at 76,000 moose can be seen all over the state. However, they are more concentrated in some locations than others. The best places to see moose in Maine include: 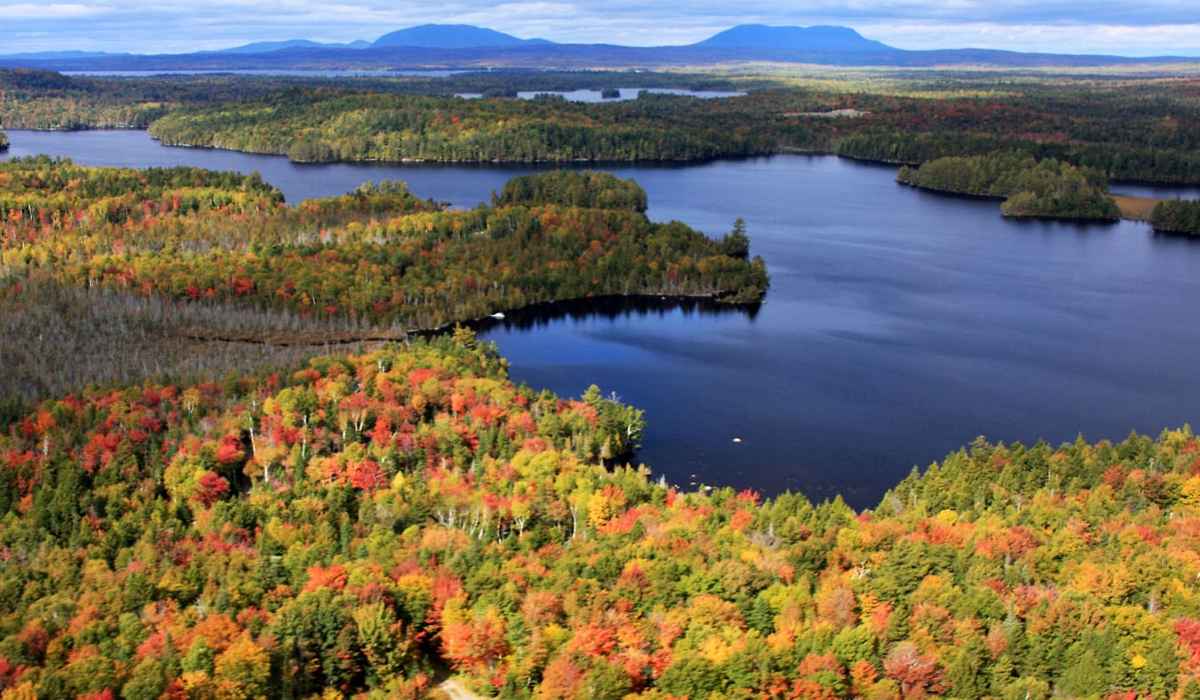 Some of the best moose-watching in Maine can be found around Moosehead Lake, where there is a vast expanse of a dense forest – a natural home for this well-known icon of the state.

Moosehead Lake region is fast becoming a top destination for tourists and outdoor lovers who come to experience the wonders of nature and watch the majestic moose and other wildlife.

Some things to do while at Moosehead Lake region

When visiting this location, there are a variety of outdoor recreational activities that you may participate in that will put you close to a moose. Some of them are as follows: 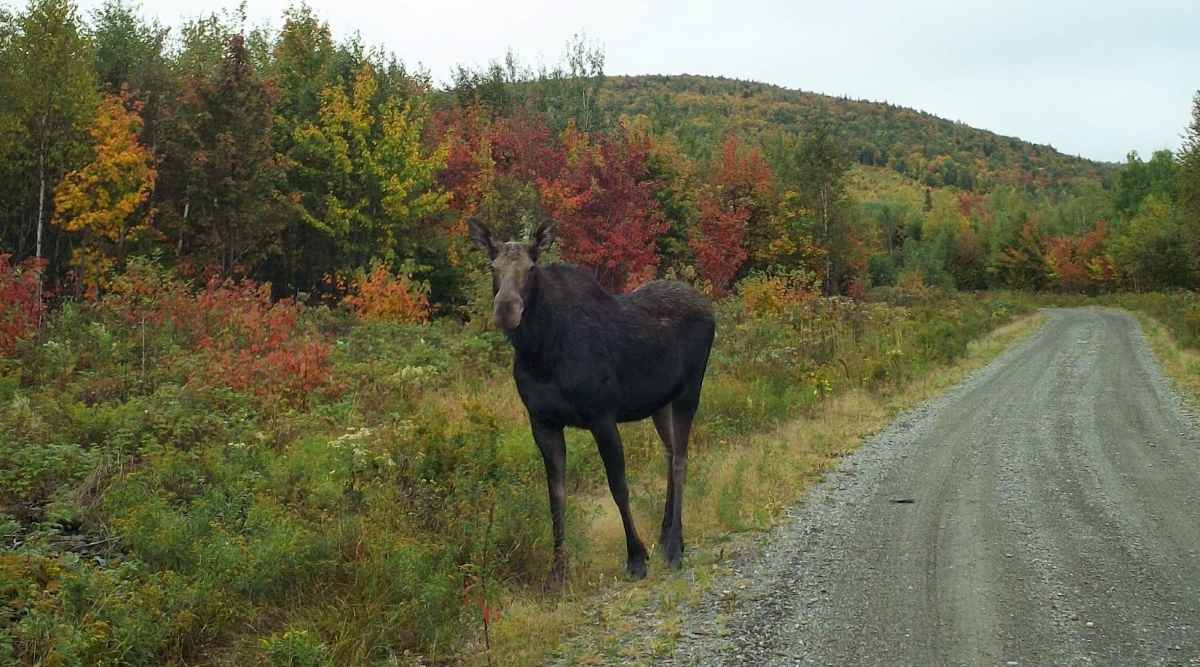 In Maine, Aroostook County has long been a go-to spot for tourists hoping to see moose, and it’s easy to see why. If you take one of the scenic drives through the area, you’re almost guaranteed to see a moose grazing by the roadside. The most popular routes for moose sightings in this county include: 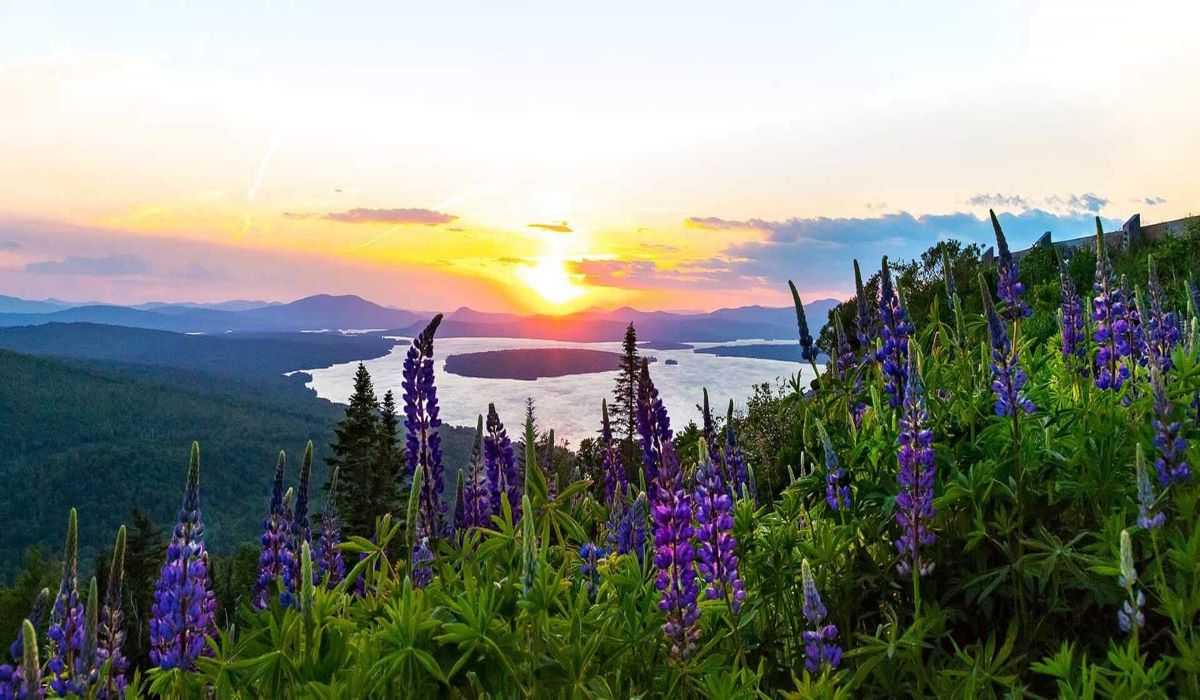 The Rangeley lake region is surrounded by forests and is a popular spot for moose sighting out in the wild. Some of the routes known for seeing moose are as follows: 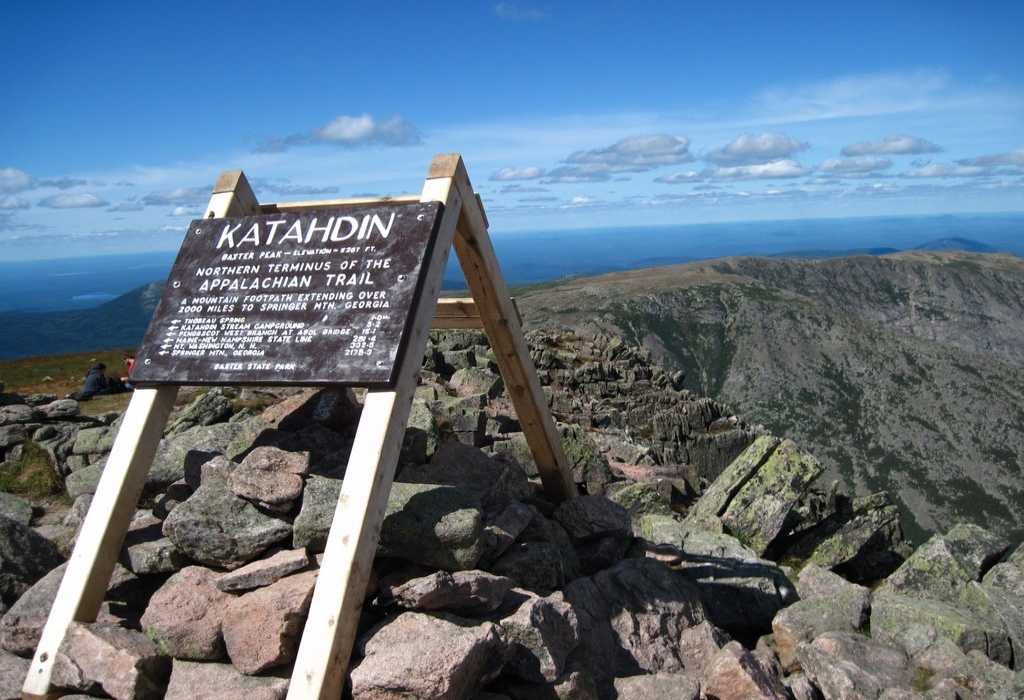 Maine’s largest mountain, Mount Katahdin, can be found in Baxter wilderness park. This park is also a moose breeding ground. Arrive at Daisey Pond around 6:00 p.m. to catch a glimpse of the park’s abundant moose population. The Russell Pond Trail is also a great place to find them. Baxter State Park also offers other experiences such as hiking. Here, you can go hiking on any of the more than 220 miles of trails that the park has to offer. 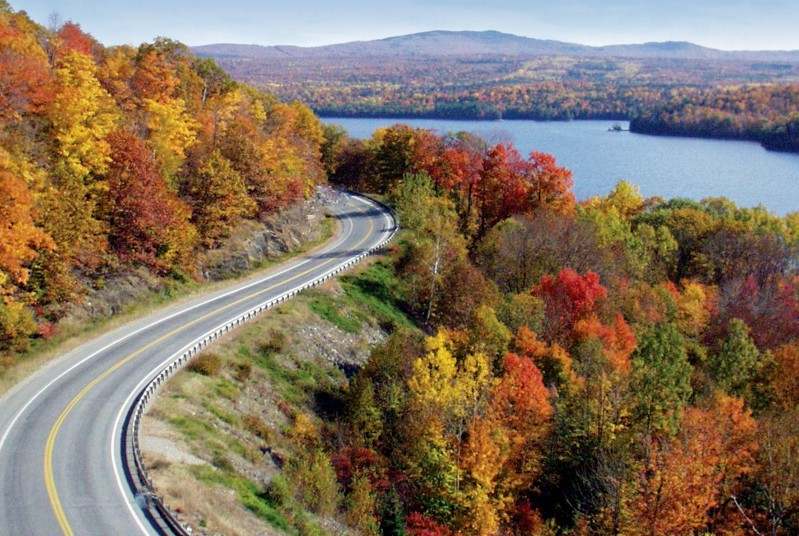 The Kennebec Valley takes its name from the Kennebec River which is a 170-mile-long (270 km) river in Maine. The Kennebec rises from Moosehead Lake and flows south for about 150 miles (240 km) to the Atlantic Ocean.

The Kennebec Valley is teeming with moose. This magnificent creature can be found everywhere along Route 201 from The Forks to the Canadian border and on Route 15 from Rockwood. As a general rule, the further north you travel, the more moose you will see.

A wide range of activities is also available to visitors to Kennebec Valley. Some of these are snowmobiling, nordic skiing, snowshoeing, and much more.

There are several registered Moose tour operators in Maine where you can go moose watching. Some of the notable ones include:

Catching a glimpse of a moose with its full rack on display or cute calf walking beside her mummy can be a memorable and fulfilling experience. But when you finally find your moose:

Well there it is – best places to see moose in Maine.

Have you embarked on this adventure yet? If so, what were your challenges and how did you overcome them?

Do you have any advice for future adventurers or a question? Let us know in the comments section.

Q: What is the current moose conservation status?

Moose is in the category of “Least Concern” which means the population is increasing.

Q: How many moose are there in the US?

Q: Where is the largest moose population found in the US?

Q: What do moose eat?

Moose eat plants. They can consume up to 100 pounds of plant a day.

Q: What is the largest moose ever recorded?

The world’s largest moose was a 1,808-pound Alaskan moose. The giant, who stood 7.6 feet tall at the shoulder, was killed in Yukon in September 1897.

Q: How many calves can a moose have at once?

Q: Is there any 100% guaranteed way to see moose in Maine?

Yes. By visiting the Maine Wildlife Park in Gray.

Q: What is the safest way to look for moose?

The safest way is to hire a moose-watching guide.